How can we help you?

Water treatment processes are critical in protecting public health. Many people associate clean and healthy water with water that has the best taste and smell. This is such a prevalent conception that many water treatment sites will compete in “best tasting water” competitions.

Often judged on taste and odor as a criteria of water quality.

Water treaters conduct a threshold odor test and a flavor profile analysis to determine the various types of odors and smells that are present in the water supply. This analysis helps set the path forward to eliminate the foul taste and odor in drinking water.

These blooms present in raw water can be a major contributor to foul taste and odor in treated water. Furthermore, various compounds derivative of industrial waste can impart foul odor and taste as well.

The flavor profile analysis will indicate specific tastes and odors that are present in the water supply. These flavors and odors are correlated to specific types of algae or pollution that lead to that result. Understanding the cause helps determine the chemical dosing path forward.

Algae Blooms are rarely harmful, but may impart foul tastes and odors.

In order to control odor problems and improve taste, chemical dosing of oxidants is widely used. Oxidation is one of the most effective methodologies to remove foul tastes and odors. Various types of oxidants, such as potassium permanganate, ozone, hydrogen peroxide, and chlorine dioxide, are the most prevalent.

While this process can help remove grassy or fishy tastes and smells, it can make some odors worse. For example, super chlorination will negatively impact those odors linked to phenols. Once super chlorination takes place, the excess chlorine is typically removed through the use of carbon.

Accurate dosing pumps should be utilized to ensure the proper amount of chlorine is added to prevent residual taste and odor. Dosing accuracy minimizes chemical use and helps optimize the process.

In addition to chemical dosing, aeration improves taste and odor caused by volatile organic compounds (VOCs) such as methane and hydrogen sulfide. Hydrogen sulfide is a common problem and is also removed via aeration.

It is important to ensure that the water is not over nor under aerated because improper aeration could lead to additional treatment challenges downstream in the process. While aeration is very effective at removing Hydrogen Sulfide, aeration does not remove foul odors and tastes associated with various types of algae, requiring chemical treatment. 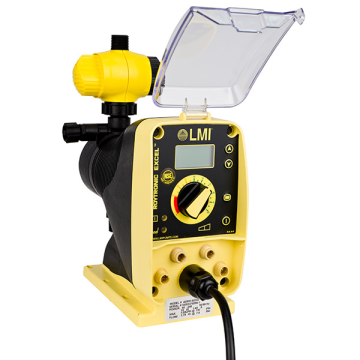 Designed to meet your most challenging water treatment needs.